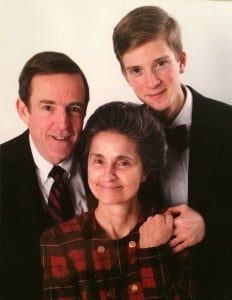 Ziesemer Family Publishers is an extension of the musical life and ministry of the Ziesemer family. We publish traditional, Christ-honoring sacred and classical music that is thoughtfully and artistically created with attention to quality and the highest standards of musical integrity.

Because hearing is the first sense to develop in a child, Daniel’s musical training began before he was born, listening to beautiful, melodious music at home and at church. He was an avid singer and composer in his crib, and in1990, and at the age of three began his violin training with William Führberg. Soon he enjoyed playing along with hymns, and sitting in on orchestras. In 1998 he added piano, organ and music theory studies with Dr. M. Dean Kincaid. Since 2001, Daniel has continued studying the violin with Dr. Roland and Almita Vamos of the Chicago College of Performing Arts at Roosevelt University and the Music Institute of Chicago. In 2003 a Christian ministry invited Daniel to play for ten benefit banquets honoring retired teachers of Moscow, Russia. He attended the Music Institute of Chicago’s Academy Program in its inaugural year 2006-2007. Daniel has been privileged to participate in masterclasses and receive coaching from such artists as David Taylor, Mark Zinger, Marico Fuchs, Rachel Barton Pine, Alan Heatherington, and Sibbi Bernhardson. In 2015 Daniel was one of eight violin semifinalists in the Washington International String Competition in Washington D.C. Daniel also enjoys arranging and orchestrating music. He is grateful for the musical abilities that the God has given him and to his parents for their dedication and loving guidance in developing these gifts. Daniel’s desire is to play and write beautiful music for the glory of God and the edification of the Church, the Body of Jesus Christ, his Savior.

With a desire to produce recordings, and to preserve and make available in print, beautiful and Christ honoring music, Daniel along with his parents founded Ziesemer Family Publishers in 2011. His discography includes Abiding, Everlasting Love, and his most recent recording I Believe in Miracles. Daniel enjoys ministering through music playing regularly at church, retirement centers and for special conferences and occasions.