On our new CD, I Believe in Miracles, Daniel Ziesemer is accompanied by Phil Garvin on the piano. We are pleased to share with you a little about the life of this good friend in the faith.

John Philip Garvin was born in Elyria, Ohio, in 1928, the son of a Baptist minister. He began taking piano lessons when he was fifteen years old. Mrs. Leary, mother-in-law of the well-known Mel Johnson, was Mr. Garvin’s first teacher. His next teachers were notable Gospel musicians: Maxine Takens and Lois Hatt, former WMBI radio organist. 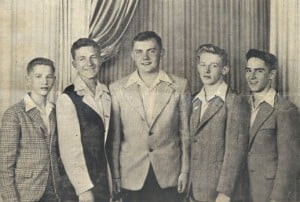 Second from the left is Phil, the pianist for The Children’s Bible Hour boys’ quartet called “The Nephews.” From the July 1945 CBH News.

Soon Mr. Garvin was asked to sing and play on The Children’s Bible Hour of Grand Rapids. Johnnie Hallett, pianist and composer for the radio program, was a very special inspiration for Mr. Garvin. In fact, when Johnnie Hallett resigned as pianist, Mr. Garvin took his place and many thought it was still Mr. Hallett playing! We have included one of Mr. Hallett’s hymns, “There’s No Disappointment in Jesus,” on this recording.

During the Korean War, Mr. Garvin was stationed in Germany as chaplain’s assistant and played the piano for a traveling servicemen’s choir. Later, he served as a missionary in Europe for five years, where
he played for Bible conferences. 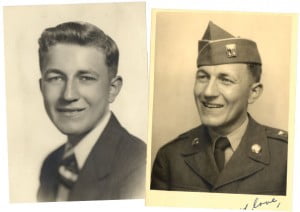 When visiting London, England, a lady gave Mr. Garvin a music book that explained how to play chimes on the piano that sounded like “Big Ben.” This technique is heard in “Silent Night” on this recording.

It was also in England that Mr. Garvin met Stuart K. Hine, who translated the famous hymn “How Great Thou Art” from Swedish into English and later composed stanzas three and four.

Mr. Garvin was eight years old when he asked Jesus Christ to come into his heart to be his Savior and Lord. Since then, the Lord has blessed him with a love for playing Gospel music. Mr. Garvin has a rich harmonic improvisation that pervades his playing and supports those whom he accompanies. 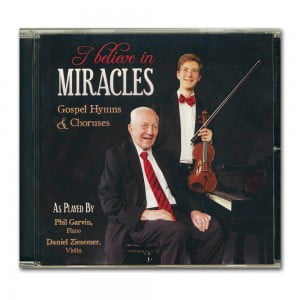 Another ministry for which Mr. Garvin has an even greater love is that of soul winning. He tells about this in his book, Fishing With Phil.

Even after suffering from a variety of maladies: a stroke at the age of 78, dupitrens (arthritic stiffening of his left little finger), and hip surgery at 85, God is pleased to continue to use Mr. Garvin at the keyboard for His glory.

View I Believe in Miracles in our shop »

There are no upcoming events at this time.